Despite Birmingham being one of the youngest cities in Europe, the increasing older population has major health and social care needs – exacerbated by the short and long-term effects of the COVID-19 pandemic. This has also accelerated the implementation of new cross-sector partnership working.

In this event, held in February 2021, The Lunar Society joined forces with the West Midlands Institute of Ageing and Health with a distinguished panel chaired by Richard Kirby, CEO of Birmingham Community Health NHS Foundation Trust (pictured).

The meeting focussed on the changing approaches to the care of older people before and during the COVID pandemic crisis of 2020 coordinated by the Birmingham and Solihull Transformation Partnership(B/SSTP) now an integrated Care System (ICS).

This demonstrates the increasing benefit of partnerships between the health, social care and voluntary sectors and the benefits of moving to a system based rather than sector-based approach to the needs of older people.

60 people joined the discussion led by Richard Kirby, CEO Birmingham Community Healthcare NHS FT(BCHC) with presenters Professor Zoe Wyrko(ZW) B/SSTP Older Peoples lead who spoke about the 5 major projects overseen across the system, Danielle Oum Chair, Birmingham and Solihull Mental Health Trust(BSMHT) who gave a summary of the issues facing our community through the eyes of Healthwatch while she was chair  Mustak Mirza service user public governor BSMHT who described in vivid detail the issues he had faced  and now sees in others in his present role and Benita Wishart Support and development manager Birmingham Voluntary Service Council(BVSC) who described the services she oversees in the voluntary sector and specific involvement in funded ageing well projects and older people’s networks in Birmingham

The increasing willingness to cooperate with as ZW said “everyone thinking together” over the last three and a half years following a Care Quality Commission (CQC) system inspection provided a basis for older people requiring health and social care interventions to access acute and community services more appropriately whether through Primary Care or Hospital Admission and/or Community services. The focus has been responding to population need through early intervention and increasingly on a public health approach focussing on prevention of illness and disability.

Public bodies such as Healthwatch played an important role in identifying issues leading to a breakdown in care and voluntary services and programmes such as Ageing Well becoming an increasingly recognised part of responses to improve people’s well-being reducing the impact of deprivation and information on access to and the availability of appropriate services.

Problems in achieving effective services working together within and across sectors has been an issue since the onset of the NHS in 1948 but the reason for hope that effective solutions can now be embedded was  that this is the first time that these changes are supported by national policy as described in the recent NHS White Paper which has replaced the 2012 Lansley focus on competition and fragmentation of local services with a population health needs based and collaborative approach, that many changes have occurred without the need for major changes in legislation and that funding is being provided to support the system changes needed. There are still significant issues in the role of the commercial sector and in the different democratic models on which the NHS and local services are based but greater recognition that regional services such as ICS’s need the flexibility to oversee system change that is appropriate to the area they oversee.

There was discussion of the need for social as well as affordable housing (defined as 70% of local housing cost), adequate housing for those with physical learning and mental health needs as well as an appropriate transport infra-structure.

The COVID 19 pandemic has been a vehicle for accelerating change whether though the digitalisation of services the rapidity in which science such as that leading to vaccination has proceeded and the restructuring of services whether acutely for those becoming seriously ill but also the need to support those left with significant problems following recovery. 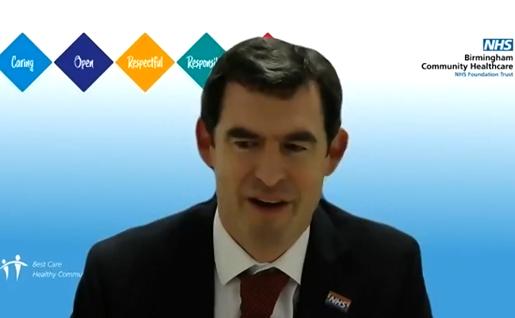 This summary of the event has been prepared by Dr Peter Mayer, Lunar Society Fellow; Honorary President of Age UK Birmingham, and Public Governor at Birmingham Community Healthcare NHS Trust.