Dame Rachel Waterhouse, who died October 14, 2020 at the age of 97, was a consumer champion and passionate Birmingham advocate and historian, who was the first Chair of the reconstituted Lunar Society in 1990 and first recipient of the Lunar Medal in 2006.

Dame Rachel Waterhouse, who died October 14, 2020 at the age of 97, was a consumer champion and passionate Birmingham advocate and historian, who was the first Chair of the reconstituted Lunar Society in 1990 and first recipient of the Lunar Medal in 2006 (from the then Chair of the Society, Hon. Alderman John Charlton at the Society’s Annual Dinner at the Banqueting Suite of the Council House).

Rachel had an extraordinary life.

She was born in 1923, before there was universal suffrage for women and in an age when few women had careers. She went to King Edward’s High School for Girls (KEHS), winning a Foundation Scholarship. After graduating from St Hugh’s College, Oxford, in 1944, Rachel returned to Birmingham, married John Waterhouse in 1947 and completed her PhD here at Birmingham University, in 1950.

Her love of history stayed with her for her whole life.

In the early 1960s she joined the Birmingham Consumers’ Group (BCG), a decision which changed her life completely.  From being secretary of the Birmingham Group in 1964, she became a member of the Consumers’ Association’s Council (publishers of Which? magazine) two years later and in 1982 became Chairman of CA Council, a position she held for eight years.

From the mid-1960s the consumer movement rapidly gained recognition, including within Government.  It was here that Rachel’s skills really came to the fore, as she was appointed to almost twenty public bodies as the consumers’ representative.  These varied from the Potato Marketing Board to the National Economic Development Council (chaired by the Chancellor of the Exchequer) and from the Duke of Edinburgh’s Inquiry into Social Housing to the Office of the Banking Ombudsman.  She was as comfortable discussing financial securities and investments as the microbiological safety of food; one day she might be visiting a farm, another an offshore oil rig (with the Health and Safety Commission).

Yet despite the almost daily commuting to London she remained firmly grounded in Birmingham. She took on many influential roles within her home city, including being a founder member and first Chairman of Birmingham’s reconstituted Lunar Society (1990-96), Chairman of the Birmingham branch of the Victorian Society (1966-67 & 1972-74), President of the Birmingham and Midland Institute (1992), Provost of Selly Oak Colleges (1997-2000), and a member of University of Birmingham’s Court of Governors (1992-2003).  In the 1990s she was appointed a Trustee of the Joseph Rowntree Foundation and she was a leading member of the Church of England’s Affirming Catholicism movement.

She was made a CBE in 1980 and a DBE in 1990. She received honorary degrees from Aston University, University of Birmingham and Loughborough University.

Dame Rachel was the first recipient of the Lunar Medal in 2006 – a prestigious award reflecting outstanding contribution to the aims of the Lunar Society and the furtherance of social and economic life in the West Midlands.

She died peacefully, following a stroke, at the age of 97, leaving four children, eight grandchildren and three great-grandchildren. She is sorely missed by all who knew her.

“Dame Rachel created a powerful legacy in forming the modern day Lunar Society, which continues to live out her purpose of creating a transparent and open forum for meaningful, influential and impactful dialogue and debate which translates into actions that change our society for the better.

“She was a pioneer of gender equality who authentically and unapologetically actioned the essence of her very being, a trailblazer that the rest of us can only seek to emulate.

“The City of Birmingham, and I would say, the world owes her a debt of gratitude.  She, much like the first Lunar men, sought to put Birmingham squarely at the centre of industry, commerce, innovation, technology and societal concerns; all the while holding true to the tradition of enlightenment.  It is a testimony to her legacy that the Lunar Society continues to be that apolitical forum for discourse that inspires new generations of thinkers and innovators providing that space for us to learn from our history whilst forging our future.

“Dame Rachel, we thank you.”

“Like so many people I was greatly saddened by the news of Dame Rachel’s death. She was a towering figure in both Birmingham and much further afield and pivotal, with Sir Adrian Cadbury, to getting the reformed Lunar Society off the ground.

“The then Lord Mayor, Harold Blumenthal, and I had been discussing the possibility of relaunching the Lunar Society but it was the drive and enthusiasm of Rachel, together with her extensive list of contacts, that made it possible.

“She was an extraordinarily gifted Chair with a great flair for bringing people together and getting the best out of them. She brought in Amanda Cadman as the Administrator who was able to pull all the strings together.

“It was an enormous privilege to have known and worked with her. She leaves an enviable legacy. The world is a better place because of her.”

“Although I was not a founder member, I remember Rachel as a friend, adviser – and always supportive. I got to know her through Amanda Cadman with whom she made a formidable partnership and a solid basis for the future of The Lunar Society.

“Visiting Rachel and husband John at home –  a big rambling house on the Bristol Road – was always a pleasure and when John suffered a speech-losing stroke, the strength of their partnership and her love while caring for him was clear. Both continued to attend meetings of the Society.

“Rachel, following a meeting in Westminster in about 2011, decided to walk to Tate Modern and was amused/shocked to see the art videos displayed. Another vivid memory is when I asked her to come to Lichfield to unveil a statue to Erasmus Darwin. In 2011, she persuaded me to stand as Chair to represent the Society. One did not refuse!

“Rachel was a powerful, considered and considerate person I will never forget.”

“I was saddened to hear of Rachel’s death, though full of years. I knew her mainly as Chair of the Lunar Society when I first joined (in 1996 or 1997 as far as I can remember). I was co-opted to the Executive shortly thereafter and in 1998, rather to my alarm, was ‘volunteered’ to the job of Hon Secretary.  I need not have worried, as Rachel was an excellent mentor, and tempered the wind to this shorn lamb.

“She was one of the three founders of the ‘new’ Lunar Society (alongside John Charlton and Harold Blumenthal, both leading Councillors, Labour and Conservative respectively).  Her deep knowledge of Birmingham’s history was a revelation to me, and central to the way that the re-founded Lunar Society developed. She was inspired by the example of Birmingham’s 17/18th Century nonconformism, which while debarring its leading lights from the professions, liberated its innovative spirit from the mediaeval influences of the guilds, and enabled its emergence as one of the leading centres of the Industrial Revolution.

“Her national eminence as founder and moving spirit of the Consumer’s Association was a vivid example of the Lunar Society’s mission of linking a broad social view with scientific method and practical industrial application.  My parents were  early  subscribers to ‘Which?’, the CA’s product testing publication, and I can still remember as a teenager in the 1960s, poring over the very first issue (comparing brands of electric kettle – we got our fun where we could in those days).  It is a tribute to Rachel’s vision that (like the Lunar Society) Which? is still going strong.  I feel honoured to have known her.”

“There are times in one’s life when meeting someone new changes the course of that life.  For me, meeting Rachel did just that.  My working life, which had till that time been focused on music and the arts at the University of Birmingham – interesting though that was – was suddenly expanded to embrace almost all aspects of Birmingham life and to meet people involved at the highest level not just in the arts but also transport, education, health, social issues, history, religion, science.

“I met Rachel through St Alban’s Church in Highgate, where I had recently joined the choir.  As well as all her consumer-related commitments in London she chaired the Restoration Appeal at the Church and also the organising committee for the St Alban’s Festival, where my dubious skills as a Treasurer seemed not to worry her.  Rachel was also on the Steering Committee for a planned reinvention of the 18th-century Lunar Society that would be non party-political and would bring together people from different walks of life to move forward debate on various issues of immediate relevance to Birmingham and its region.  One day, she told me, she came back from a meeting in London to find that the Steering Committee had elected her as founder Chairman of the new Society in her absence.  She suggested that they might soon find they needed a little administrative back-up: would I be interested in being considered?

“You bet I would!!  Rachel and Sir Adrian Cadbury interviewed me some months later and I joined initially (self-employed) for half a day a week, as I recall.  Rachel chaired the Society 1990-1996 and I was the Society’s Administrator 1991-2007.  It was an enormous privilege for me to be at Rachel’s side as she shaped the new Society.  As well as a wonderful working relationship (she left a good deal of day-to-day decision-making in my hands, always supporting but never controlling), we also became the best of friends and I was happy to be able to play a supporting role when, after her husband John’s devastating stroke, Rachel continued to hold down her chairing roles in London and Birmingham.  She was rather fierce in her insistence that he learn to walk effectively again, and I often drove him to the Institute for Conductive Education to that end.  I assisted Rachel with the Bernard Isaacs Memorial Fellowship Appeal, raising funds for Research into Ageing with Peter Mayer.  How appropriate that the Fellowship was won by a physiotherapist researching into muscular re-education after stroke!

“I recall going to see Rachel and John in loco parentis to tell them that I proposed to get married again after twenty single years.  Rachel was rather scathing, since Peter is 12 years my senior and she thought he was simply looking for a carer in old age.  Luckily, he is a historian too (as well of course as being a Lunar Society member) and I soon found myself half-excluded from detailed historical discussions!  My final work as administrative assistant was to help Rachel with arrangements for the move from Birmingham to Prestbury.  Peter and I have been up to visit a number of times, but never enough.  It was a huge privilege to work with her and to enjoy her friendship.  Thank you, Rachel, may you rest in peace and rise in glory.” 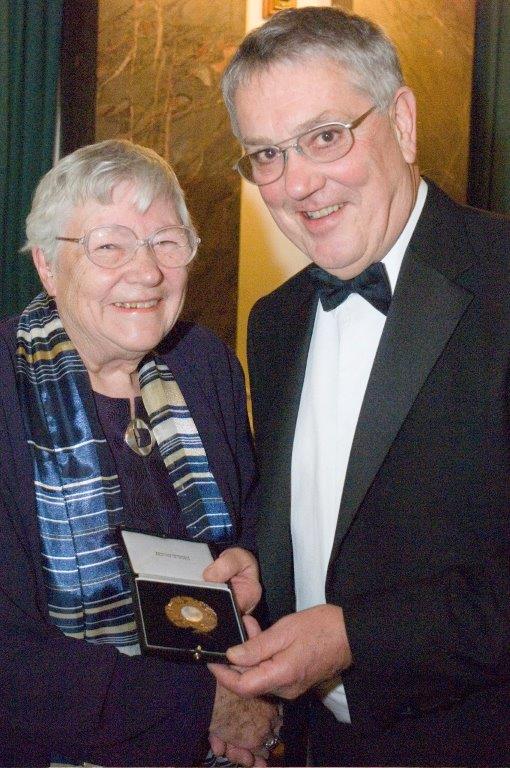 Dame Rachel Waterhouse received The Lunar Medal in 2006 from Hon Alderman John Charlton, then Chair of The Lunar Society