In the late eighteenth century, the meetings of a few fertile minds changed an age. The original Lunar Men gathered together for lively dinner conversations, the journey back from their Birmingham meeting place lit by the full moon.

They were led by the larger-than-life physician Erasmus Darwin, a man of extraordinary intellectual insight with his own pioneering ideas on evolution. Others included the flamboyant entrepreneur Matthew Boulton, the brilliantly perceptive engineer James Watt whose inventions harnessed the power of steam, the radical polymath Joseph Priestley who, among his wide-ranging achievements discovered oxygen, and the innovative potter and social reformer Josiah Wedgwood. Their debates brought together philosophy, arts, science and commerce, and as well as debating and discovering, the ‘Lunarticks’ also built canals and factories, managed world-class businesses — and changed the face of Birmingham.

The principal Lunar Men listed in order of age.

There is more information about the original Society on these sites:

Jenny Uglow is author of The Lunar Men: the friends who made the future, published by Faber & Faber in 2002, a widely acclaimed book about the lives of these remarkable men. 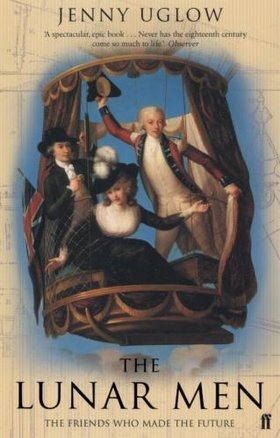