James Keir was born in Scotland, his parents’ 18th child. He studied medicine at the University of Edinburgh, where he met fellow Lunar Society member, Erasmus Darwin. 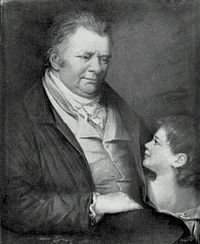 Keir joined the army at 22 and was commissioned into what became the Gloucestershire Regiment. During the Seven Years’ War he was stationed in the West Indies and achieved the rank of Captain in 1766. He resigned his commission in 1768.

He moved to West Bromwich and devoted himself to studying chemistry and geology. In 1772, Keir was one of a group who leased a glassworks at Amblecote near Stourbridge, which he managed. While there, Keir continued his chemical experiments, particularly into the properties of alkalis. A paper by him “On the Crystallisations observed on Glass” was the Royal Society’s Philosophical Transactions in 1776.

His friendship with Boulton was already established when he was introduced to James Watt in 1768, at Boulton’s house and ten years later he took over the management of their engineering works in Soho, Birmingham.

The following year he invented, and took out a patent for, an alloy of copper, zinc, and iron, which could be forged hot or cold. It is said to be almost identical with what later became known as Muntz metal. Another year later and he had established a chemical works at Tipton for the manufacture of alkali from the sulphates of potash and soda, which later expanded to include a soap factory.

James Keir died at West Bromwich and is buried at All Saints Church, Charlemont. His marriage resulted in one surviving daughter, Ameila.