Richard Lovell Edgeworth, an Anglo-Irish inventor and educationalist, Edgworth worked to improve the conditions of his tenants by land reclamation and road-improvement schemes.

He was an inventor of a variety of machines and fascinated by the possibility of telegraphic communication. He worked on designs for a cycle, a turnip cutter and a four-wheeled open carriage, amongst other inventions. 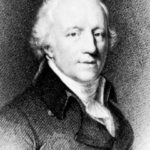 In 1798, when the French landed an expeditionary force in Ireland, he organized a troop to fight them. In 1802 he took his family to Paris and was received in scientific and literary circles and in 1806 he joined a commission of inquiry into Irish education.

Practical Education (1798), written in collaboration with his daughter, Maria Edgeworth, was inspired by the French-Swiss philosopher, writer and composer, Jean-Jacques Rousseau and by Edgeworth’s second wife, Honora. They argued that the pace of teaching should be adjusted to the child’s age and ability. Edgeworth discouraged learning by rote, believing that while some things require sustained effort, others can be learned through play; children should be given toys that stimulate them to productive activity.