William Withering was an English botanist, geologist, chemist, doctor and the discoverer of digitalis. Born in Wellington, Shropshire, Withering trained as a physician and studied medicine at the University of Edinburgh Medical School. He was a consultant at Stafford Royal Infirmary and was appointed physician to Birmingham General Hospital at the suggestion of fellow Lunar Society member, Erasmus Darwin. 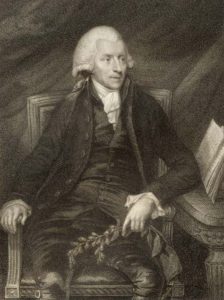 He married Helena Cookes (an amateur botanical illustrator) in 1772 and they had three children, only two of whom survived infancy. In 1783 he diagnosed himself as having pulmonary tuberculosis and went twice to Portugal in an effort to improve his health. In 1785 he was elected a Fellow of the prestigious Royal Society and in the same year published An Account of the Foxglove and some of its Medical Uses, which contained reports on clinical trials and notes on digitalis’s effects and toxicity.

Withering wrote two more editions of this work in 1787 and 1792, in collaboration with fellow Lunar Society member, Jonathan Stokes, and after his death his son (also William) published four more. It continued being published under various authors until 1877.

Withering senior also carried out pioneering work into the identification of fungi and invented a folding pocket microscope for use on botanical field trips. He also introduced to the general audience the screw down plant press. In 1787 he was elected a Fellow of the Linnaean Society in recognition of his contribution to botany. Subsequently the plant Witheringia solanacea was named in his honour, and he became known on the continent of Europe as “The English Linnaeus”.

He had leased Edgbaston Hall in 1786 and during the Birmingham riots of 1791, when Joseph Priestley’s home was destroyed, Withering prepared to flee from Edgbaston Hall, but his staff kept the rioters at bay until the military arrived on the scene. In 1799 he moved into a smaller, warmer home – without Helena – and died shortly afterwards. He was buried in Edgbaston Old Church, next to Edgbaston Hall. There is a memorial stone inside the church which has foxgloves and Witheringia solanaceae carved upon it to commemorate his discovery and his contribution to botany. William Withering is also remembered by one of the Moonstones in Birmingham.