A series of four events organised by The Lunar Society to mark Black History Month, 2020, achieved record online participation and a worldwide audience – and highlighted not only issues affecting society but also promoted visual and performance arts.

The four events covered law, politics, innovation and technology and health and each was chaired by an acknowledged authority in their field.

Deirdre LaBassiere, the Society’s Chair, reviews the events and looks at how they helped to shine a light on shared British from the perspective of all people.

2020 Vision was the hope with which many wanted to see through this year; it was to be that year that we were to be able to, individually and collectively, have that clarity and sharpness of vision that would enable us to move ourselves and society forward to better and more productive lives.  We were, however, hit squarely in the eyes by a something we did not see coming; a worldwide pandemic which was exacerbated by racial tension and highlighted race inequalities.

And so, in October 2020, the UK took a moment to pause during Black History Month to reflect on what we, as a society had been seeing – of the reality of our society and how we deal with and respond to race.  We considered it from all angles, including Black people dying disproportionately in the pandemic; to the true meaning of allyship; to racism in the workplace; all within the lens of the horrific murder of George Floyd and his dying words, “I can’t breathe.”

To bring these and so much more to the fore, to address the Lunar Society involvement in black history, to celebrate black art and the achievements of black individuals in the areas of Law, Politics, Health and Innovation & Technology, the Lunar Society, in keeping with its aims to stimulate ideas, broaden debate and catalyse action held an extremely successful and inspirational Black In…Series.  The Series brought together panels of remarkable, extraordinary and outstanding individuals whose skills, values, capabilities, diversity and achievements were the foundation for honest, robust, transparent and valuable discourse, for our times.

Through the events, the scale and impact of institutionalised and systemic racism whether on the street or in the workplace was laid bare, with personalised stories from panelists, whether from the perspective of the courtroom or the NHS.  Racism was seen to not pick and choose who was targeted and the experience of young Black men stopped and searched more than 20,000 times during the previou coronavirus lockdown (the equivalent of 1 in 4 young Black men) was referenced, along with the experience of many black professionals including MPs, lawyers, senior police officers, sports personalities and many more.

It was recognised that the #BlackLivesMatter protests around the world ignited a commitment amongst many individuals and organisations to educate themselves about Black history, heritage and culture – seeking to understand racism and stand in solidarity against it.  It was said of the events that they created a safe space amongst a diverse audience for honest and robust conversation with clear roadmaps for healing and change.  Indeed, after the Black In…Law event, one individual who attended discussed with me his previously unrealised unconscious bias and committed to going back to his organisation to make meaningful change in culture, starting in the boardroom.  And as he said, that was one step in the right direction.

The events showed a true commitment for real change, as everyone, from all communities, embraced the Black In…Series as a starting point for exploring, discovering and celebrating Black history, heritage and culture – both past and contemporary. From the incredible achievements and contributions of our Chairs and panelists, to the many previously untold stories of our audience regarding barriers to progress to the day-to-day reality of bias and racism, institutionalised or otherwise, the events showed what is possible with honest discourse and debate.  One such barrier, which stuck in my mind, was that of Lord Simon Woolley who told of how he had been mistaken for the “help” and asked to do the photocopying in the House of Lords library.  In 2020 this should not be happening and as one young man said, he is looking to the older ones to be honest as Lord Woolley was and to work with his generation to ensure that he will not be mistaken for the “help” in the future.

Significantly, this year’s Black History Month was an opportune time to shine a light on our shared British history.  To tell the unabridged story, genuinely and truthfully, to decolonise and reclaim history, and tell history from the perspective of all people.  This meant telling the story from black and white standpoints, including the original Lunar men – who individually played significant roles in slavery and the trade – from the innovative technology of the Boulton & Watt Steam Engine and how it was built on the profits of slavery but conversely helped to make the slave redundant in the Caribbean, thus contributing to the demise of slavery; to Josiah Wedgewood who created the medallion, “Am I Not a Man and a Brother” that formed a significant part in the drive to abolish the trade and end slavery.

During the summer, we had a movement advocating the destroying of controversial statues and monuments and through the Black In…Series society was encouraged to have that open discourse of how colonial objects and symbols can be used to tell the true story of history.  Now, we have a responsibility to be openly honest about what it means to us and to address hurts, traumas and biases whether they are generational and/or current.

Black History Month 2020 was also a time to look forward and celebrate the here and now – and future possibilities. In years gone by, October has been the only time of year when the UK talks about the achievements of Black people in Britain. The Lunar Society events of 2020 will, I hope, be a catalyst for Black history and achievement to be shared much more widely – in public and private sector organisations, libraries, museums, art galleries, schools, colleges, universities, public spaces, the world technology, political and legal arenas, the NHS and communities. As was said, celebrating the history and the achievements encourages those coming behind us to take a seat at the table. A tangible suggestion arose from the Black In…Politics event of having a young membership forum for the Lunar Society that could advance the discussions and with focused succession planning, for the future.

An observation was made that black people have always made history and always will – but what is missing is that there is a lack of Black people taking the lead (or being given opportunity to) on how that history is discovered, explored, researched, chronicled, archived, curated, exhibited and communicated. It was recognised that the same applies to innovation and technology.  That means supporting Black-led heritage and tech organisations, artists and professionals; making national and local institutions much more accessible and proportionally representative; and empowering communities to define and share what Black history and innovation means to them.  It means as, Allan Bennett, so aptly exemplified in his poem, “But Still”, that we must educate ourselves on those who have and are contributing, past and present such as, Sarah Boone, Mary Van Brittan Brown, Garrett Morgan, Thomas Mensah and Lonnie Johnson.

Each event featured two artists of black origin, from internationally reowned contralto Marie-Claire Giraud, who debuted, “The Haunting of Us” to the incomparable visual artist Marcia Blackwood whose paintings encapsulated the beauty and culture of the black experience particularly during the COVID lockdown.  What was palpable was that black arts and culture is a golden thread that perpetuates through all society and that Black history is more than just a month to be ticked off a calendar. As one participant so aptly said, “Every month is Black History Month.”

The inspirational Black In…Series celebrating Black History Month 2020 was a time for people of diverse backgrounds to come together and hopefully learn lessons from the past for the present and the future. It was a time to honour the commitment to learning, stand united against racism and to decide to be accountable.  It was a time to reclaim history and re-imagine how our shared history will be told in the future.

Thank you to the inspirational, phenomenal and incredible Chairs, panellists and artists who contributed to the success of the series namely: 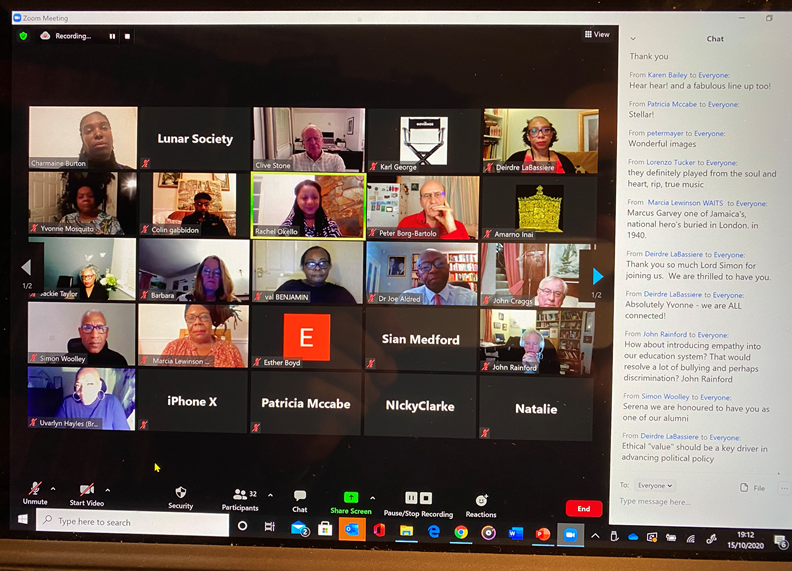