This event was held over Zoom in the afternoon of the 16th July 2021.

This presentation was the second in the Boulton and watt Lecture Series for 2021. Despite the disruption caused by Covid-19 since 2020, The Lunar Society has organised this Series to concentrate on issues concerning the most important topic of Climate Change. This is in full cognisance of the fact that the UK is hosting COP26 in November this year.

It was a great pleasure and an honour to host this event, which was well attended and raised a wealth of discussion. Councillor Ian Ward, the outstanding Leader of Birmingham City Council and Transport Lead, presented his views and responded to questions and other points of view in this two-hour virtual meeting.

The recent introduction of the Birmingham Clean Air Zone (CAZ) in the City Centre demarcated by the A4540 ring road is a small step in decarbonising the City Centre. During this event Councillor Ward presented a summary of the Draft Transport Plan for Birmingham that is aimed at covering developments till 2030. It is hoped that the plans will improve air quality and help Birmingham to play its part in the meeting Climate Change 2050 targets.

But what impact will it have – and is it sufficient?

Climate change, mainly caused by Carbon Dioxide emissions, is having a harmful effect on our planet. The importance of tackling climate change is now at the forefront of our transport system. Birmingham City Council recognises the significant effects that climate change is having on livelihoods and the environment as well as the economy and has declared a climate emergency. This supports a strategic commitment to create a carbon neutral Birmingham by 2030.

The launch of the Birmingham Route to Zero (R20) Taskforce followed a cross-party declaration of a climate emergency by Birmingham City Council in June 2019, with the council’s Cabinet then agreeing in July 2019 to make tackling climate change one of the authority’s main priorities. Climate Change has been recognised as an existential threat to Birmingham, the UK and the World for at least the last thirty years or so. Now action is called for. This new climate change taskforce for Birmingham has drawn up a plan of action to tackle the causes of climate change to make our city and our world a better place for future generations to come. The taskforce works in partnership across the city, engaging with our many different communities, age/disability groups, and business, commercial and residential areas.

Road transport is by far the largest source of air pollutants that are most harmful to health – Nitrogen Dioxide (NOX) and particulate matter. Also, over-reliance on car travel – particularly for short journeys – is a main contributor to physical inactivity which is linked to heart disease and cancer, the biggest causes of premature death.

It is planned that revenue generated by the introduction of a CAZ, as in other cities, will be reinvested in transport schemes to improve the road network and further reduce emissions. Presently, vehicles that meet the latest emission standards (EURO 6 – Petrol or Diesel) are exempt from the charges raised within the CAZ.

The greater adoption of Battery Electric Vehicles (BEVs), although presently representing a small proportion of vehicles in Birmingham, is one of the ways forward to decarbonise the City. The relative lack of suitable charging facilities, however, in the city make the use of Electric Vehicles problematical especially if a car is to be charged on the kerbside.

Recently, a Hydrogen Fuel Cell Electric Bus was delivered to Birmingham City Council, this being the first of an order of 20 such buses. The only commercially available Hydrogen filling station in Birmingham is located in Tyseley at the Tyseley Energy Park. This filling station would also be available to privately-owned Fuel Cell Electric Vehicles (FCEVs), though the number of such vehicles in Birmingham is extremely low.

BEVs and FCEVs would be a move forward in the de-carbonisation of the City, the uptake of such technology being restricted by the lack of relevant infrastructure.

Some other ways of helping in emissions control for Birmingham are:- a) reallocating road space, as has already been done by creating a cycle lane on the A38 (the Bristol Road), the same is being actioned presently on the A45 (the Coventry Road); b) transforming the City Centre with increased pedestrianisation; c) prioritising active travel through local neighbourhoods; and d) managing demand for the motor vehicle through parking measures.

This superb two-hour session led to many questions, some of which are tackled above, with many points for discussion that could not be covered in the time allowed.

The Lunar Society is greatly indebted to Councillor Ian Ward for having spent the time talking to us responding to the issues brought up by the participants. The discussion preceded, and will continue after, this very worthwhile presentation and discussion. There will be grounds to revisit the subject beyond the Climate Change negotiations and as a check on future progress.

The Lunar Society is committed to stimulate ideas, broaden debate and catalyse action – heritage for the future. 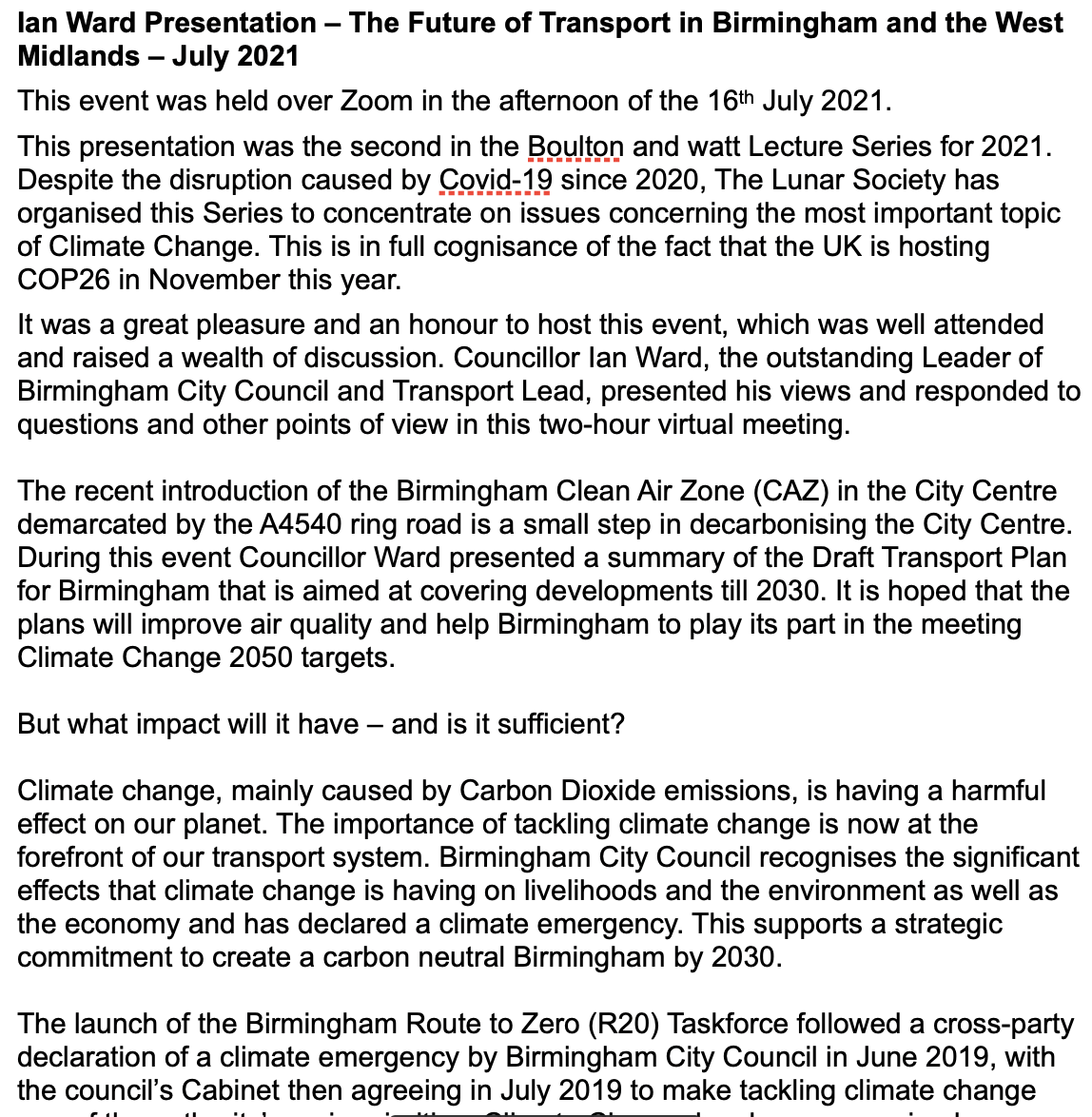