Just how well do we understand what controls our climate?

As the United Nations Framework Convention on Climate Change met for its annual gathering in Madrid and on the same day it was declared that earth has experienced what is likely to be the hottest decade on record, The Lunar Society hosted the first in a series of lectures and talks on the issue of climate.

The first event in The Boulton and Watt Lecture series for 2019/2020 was presented by two professors who have achieved worldwide reputations for their hypotheses as to the cause of climate change and the contribution made by the interaction between cosmic rays and solar activity in the influencing of cloud cover and earth’s climate.

A packed audience heard from Professor Mike Lockwood, FRS, Professor of Space Environment Physics at the University of Reading – who spoke on “Global and regional climate change: what we know and what we do not yet know”- supporting the CO2 argument. Professor Henrik Svensmark, Physicist and Professor in the Division of Solar System Physics at the Danish National Space Institute in Copenhagen and the originator of the cosmic ray hypotheses spoke to “The role of sun in climate: is it important?”.

The Boulton & Watt Lecture was hosted The University of Birmingham and sponsored by Breckland Scientific. In a wide-ranging discussion members and guests heard variously that half of global warming could be caused by solar activity but also that manmade CO2 emissions are the cause of climate change.

It was also acknowledged that debate on the subject, at least outside academic circles, was stifled. Broadcasters in particular came in for criticism as being “anti-debate” on the causes of climate change.

Said Professor Svensmark: “This is the first debate that I have attended in more than 10 years.

“My claim is climate sensitivity is relatively low and if you look at data there are no trends – which is a good thing.”

However, Prof Lockwood concluded: “Nobody lives in an average world; we each live in our own climates. We are changing land use and that has an impact. There’s no doubt that we are changing things.”

Deirdre LaBassiere, Chair of the Society who facilitated the event, said: “In true Lunar Society tradition the debate was robust & indeed, on occasion controversial, yet respectful.

“The discussions were held in the context of the view that man-made CO2 has caused warming over the last century and that unless CO2 output is drastically reduced we face global catastrophe.

“The UK aims to be carbon neutral by 2050 but to meet that target will require an investment estimated at more than £1trillion. The consensus of the event was that scientists must be provided the platform for open debate in order to inform the critical issue of climate change. We were delighted The Lunar Society can facilitate such an event. Both Matthew Boulton and James Watt would be proud.”

A recording of the event, can be viewed on our YouTube channel here:- 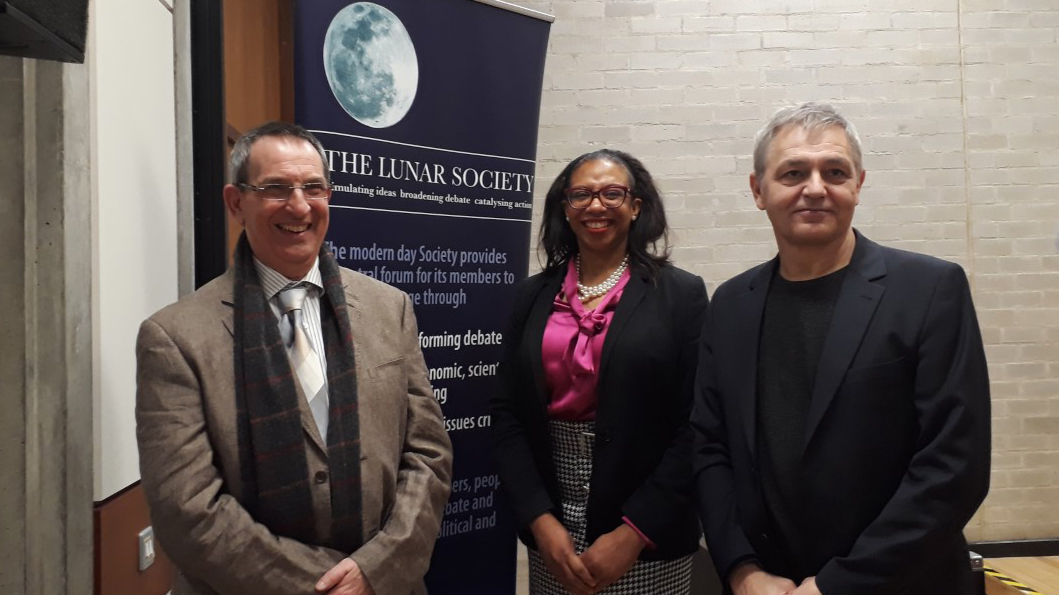