The Challenge of Climate Change

Millions of years ago, the atmosphere of our planet was thick with carbon dioxide (CO2); it is a greenhouse gas, which means that it captures the heat of sunlight and causes the air temperature to rise, so in ancient times most animal life could not live in it. Fortunately ancient plants were able to grow, capturing the energy from the sun and the CO2 from the air while producing oxygen. Over millions of years the plant life died and laid down layers of carboniferous deposits that became the coal, oil and gas that stored the energy that was captured from the sun’s rays.

In the early days of the industrial revolution in the 18th century, we learnt to burn the coal for the energy needed to smelt iron ore and generate steam to produce mechanical power. We went on to discover that oil and gas could also be a source of heat, which hugely expanded the world’s use of fossil fuel energy. Unfortunately by burning fossil fuels over the last 250 years, we have been releasing the CO2 back into the atmosphere and absorbing oxygen in the process, which is causing our climate to start returning to what it was like millions of years ago, with a gradual and inexorable warming of the planet. There is clear evidence worldwide of this, and some argue that it is not man-made, but either way, by emitting the greenhouse gas CO2 as we consume fossil fuels, we are adding to the problem of global warming, which we must stop increasing, otherwise the earth’s atmosphere will return to the primeval conditions in which animal life, including us, cannot survive.

The Paris Agreement signed in 2015 by 196 nations including the UK, was to implement measures to limit global warming to between 1.5OC and 2.0OC above pre-industrial levels. The UK ratified this agreement in 2016 and signed a legally binding target to stop all net zero carbon emissions by 2050.

This is a huge challenge which I am following closely, as the Government appears to be more concerned about improving the efficiency of our use of energy with better insulation, energy efficient machines and processes, which are all very important, while giving little attention to how our energy supplies must all be converted to non fossil fuel sources.

Using the latest Government data on the UK’s energy consumption[1] in 2018, it was 191.4 MTOE[2] or 2,226 TWh[3]. Of this energy, only 161.2 TWh or 7.2% was not fossil-fuel energy, including nuclear power which is in decline, so we will have to convert the difference of 2,065 TWh to net zero fossil fuel energy. And our energy demand is rising; the International Energy Agency (IEA), predicted late last year, that global energy demand will increase by between 25 % and 30 % by 2040.

While we may be able to increase our renewables energy produced by wind, solar, hydro, ocean currents and other sources, which was 84.6 TWh in 2018, the available space on land and coastal waters will limit this by say 6 times to about 500 TWh, leaving a deficit of around 1,726 TWh.

There is only one other proven available source of zero fossil-fuel energy and that is, unfortunately, nuclear fission power. The UK has committed to built 8 new nuclear power stations each of 3.2 GW or 28 TWh a year, but they are unlikely to run at more than 60% of the time (the load factor) so each of them may produce 16.8 TWh, and together they will generate around 135 TWh, leaving the zero carbon energy deficit as 1,591 TWh. Hinkley Point C is the first and under construction, and Sizewell C is at the planning stage.

New nuclear power stations are expensive to build, because current technology transfers the heat to steam turbines with high pressure water, that could explode in a meltdown, so they are installed inside very strong double-walled containment buildings. Instead of just building lots of expensive new nuclear power stations, it would be far less expensive to also retrofit existing gas-fired power stations with small modular reactors (SMRs) and retain their steam generation and turbines, as well as the installed electric distribution equipment. SMRs can be mass-produced in a factory and taken to site on a heavy goods vehicle; this technology is well proven and derives from SMRs for nuclear submarines; they represent a significant export opportunity to countries that do not have the technical expertise to built them themselves.

Hydrogen which powers the sun, is the basic energy vector of the universe, and can be used as a source of zero carbon energy to power many systems, from the smelting of iron and steel, to heating buildings and powering transport, but it must be produced with zero fossil-fuel electricity by the electrolysis of water, that splits it into hydrogen and oxygen.

Most hydrogen produced in the UK is manufactured by the steam reforming of methane with carbon capture and storage (CCS) but the capture is only up to 95% efficient, so it is not zero carbon and should only be used as a stepping stone to 2050 as a hydrogen source.

All our energy needs must ultimately come from zero carbon electric power that can be either connected directly to the consumer, to power domestic, commercial and industrial equipment, or for moving equipment such as transport, when the electric power can be stored in batteries, or carried in tanks of high pressure hydrogen, to be converted back into electricity with a fuel cell.

For transport, battery power is best suited to small vehicles for low daily mileage that can be charged over-night, as the increasing weight of the battery needed to drive larger vehicles for longer, becomes less energy efficient overall, and then hydrogen power becomes more attractive. Some small vehicles that work 24/7 such as fork-lift trucks in distribution warehouses, are best suited to hydrogen power which can be quickly refuelled and the vehicle put back to work.

Hydrogen is well suited to power trains which is particularly useful for lines that have not been electrified, as the capital and maintenance costs of the overhead equipment is high, and they are vulnerable to extreme climate and to flying objects. Hydrogen powered electric trains are running passenger services in Germany and it is hoped that they will soon be introduced in the UK. Retrofitting existing UK diesel-electric trains to hydrogen-electric has already been developed and could be the key to decarbonising our non-electrified railway lines.

The “Holy Grail” of energy is nuclear fusion power that replicates the energy production of the sun. In the sun the pressure is massive, so the temperature needed to have hydrogen ions fuse together is 10 million oC. Here on earth we cannot replicate those huge pressures, so we have to raise the temperature of the hydrogen to around 150 million oC for fusion, and even then we have to use the heavy isotopes of hydrogen deuterium and tritium to do it. Fusion energy has always been 30 years away, however real progress is now being made in several countries, and here in the UK Tokamak Energy has already reached 15 million oC. The very large fusion project supported by major world powers is the ITER project just north of Marseille in France that hopes to create the first brief fusion plasma in 2025. The goal of ITER is tp produce 500MW using 50 MW to power it, which is 156 times the power of Hinkley Point C.

David Dundas, a Fellow of The Lunar Society and a member of the Executive Committee, (2020 -) presented a meeting on The Challenge of Climate Change – not from a desert island as his virtual background (pictured) portrayed but from his home in Lichfield. Here, he explains the background – and why he is following the challenge so closely 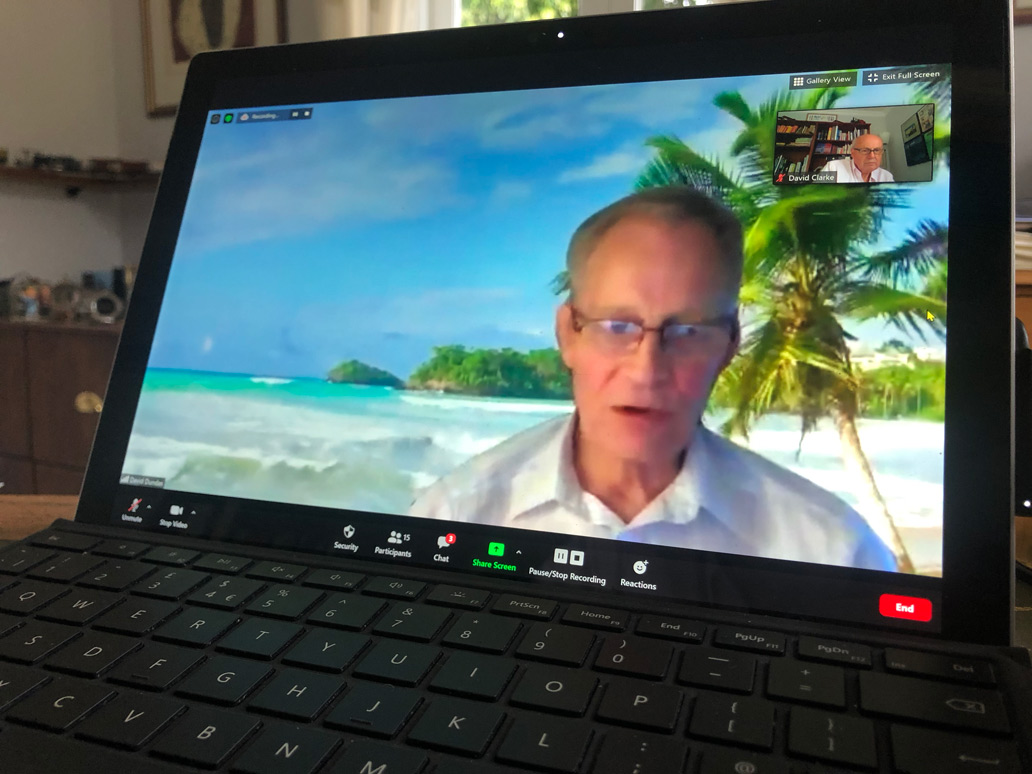