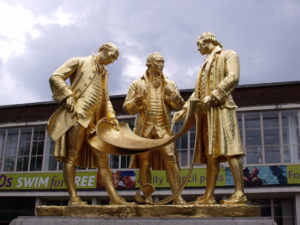 The Lunar Society Heritage Trail Leaflet  provides visitors and local residents with an introduction to the Lunar Society and 18th Century Birmingham by following in its members’ footsteps.

The walk and guide highlights the leading role Birmingham played in the creation of the modern world through the scientific discoveries, shared conversations and informal meetings of a remarkable group of friends.

The city centre walk takes in the surviving historic sites most closely associated with the Society’s members, together with the places where one can still see examples of their work and influence. Highlights include St Philip’s Cathedral, Birmingham Museum & Art Gallery, the Library of Birmingham, the city centre canal network, Birmingham Assay Office and St Paul’s Square.

The out-of-town guide focuses on the sites associated with the Lunar Society, which can be visited by the public. These include the iconic Soho House (home of Matthew Boulton), Edgbaston Old Church (burial place of Dr William Withering), St Mary’s Church Handsworth (burial site for Boulton, Watt and Murdock), the Soho steam-engine Foundry in Smethwick and, perhaps less obviously, Sarehole Mill and Aston Hall which have links with Matthew Boulton, James Watt and their sons.

The Society has recently launched a  Midlands Lunar Trail which explores the Midlands connections of the original group.

A key aim of the trail is to make people aware of, and encourage them to visit the fascinating range of historic sites, museums and other heritage attractions across the Midlands which are associated with the Lunar Society and the English Enlightenment.

Both trails have been written by Chris Rice, a freelance curator, historic buildings expert and heritage project manager.

The 1-2 hour city centre walk takes visitors to historic sites and buildings closely associated with the Society and its members.